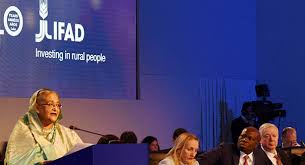 Prime minister Sheikh Hasina on Tuesday urged the development partners for investing in sustainable rural economies to ensure resilience to agricultural crisis as the inclusive and sustainable rural transformation hold key to eliminate poverty and hunger.
‘The development partners have to be a little more generous in order to eliminate poverty and hunger. The world appears to me to be ready now for it. I would like to urge you for investing in sustainable rural economies,’ she said.
The prime minister made the call while delivering her keynote speech in the 41st Session of the IFAD’s Governing Council held at the Headquarters of International Fund for Agricultural Development in Rome with its president Gilbert Foussoun Houngbo in the chair.
The theme of the session was ‘From fragility to long-term resilience: Investing in sustainable rural economics’.
Sheikh Hasina said, ‘We believe that in order to ensure resilience, investment in rural economy is a key factor. This, we believe, cannot be achieved without global partnership and cooperation.’
Noting that sustainability cannot be achieved without creating long-term resilience she said, ‘A comprehensive sustainable rural economy requires investment in the development of the rural social fabric and climate resilience.’
Focusing on the Sustainable Development Goals (SDGs) 2030, the prime minister said, ‘Inclusive and sustainable rural transformation is the key to reaching the goals of poverty elimination, hunger elimination and leaving no one behind.’
Mentioning that Bangladesh having over 160 million people is the most densely populated country in the world, she said it is poised to achieve the SDG goals well ahead of 2030 and it estimates that poverty will be eradicated altogether by 2024.
But Bangladesh faces other formidable challenges as it is likely to lose 40 per cent of its productive land by 2080 if sea levels rise 65 centimetres only. ‘Changes in crop production due to the impact of climate change will increase the number of people living in poverty. Therefore, significant resources must be tapped in order to ensure better adapted and resilient agricultural practices,’ she added.
Talking about the remarkable achievement of Bangladesh, the prime minister said the country has been very lucky with stable governance for almost a decade. ‘We formulated our strategy of socio-economic growth very carefully over a period of about four years. And then we tried to implement it in the last nine years.’
Fortunately, she said, the development partners came forward with eager and generous hands and jointly made the proud progress.
Noting that IFAD’s model of mutual help and partnership is very different from that of other UN agencies and organisations she said, ‘We sincerely believe that this ideal model will work in the promising future that is before mankind now.’
Sheikh Hasina said according to World Economic Forum report, the world’s population is projected to surpass 9 billion by 2050 and there will be a huge strain on declining global arable land, forests and water.
She said rise in sea level will heavily reduce arable land in many countries and Bangladesh will be its victim again without contributing to sea level rise at all.
‘Global food demand in 2050 would increase by at least 60 percent over 2006 levels and food prices are likely to increase by at least 84 percent,’ she added.
Regarding how to respond to such a combination of adverse developments the Prime Minister mentioned the success story of Bangladesh. ‘First of all, let me tell you that the natural resilience of Bangladeshi people to any crisis did not allow the build-up of a food crisis in a year of climatic vagaries and reduced food production in the country.’
She said the resolve of Bangladeshis to tighten the belt, encounter difficulties with confidence and seek alternative ways of meeting the crisis enabled the country to overcome and succeed.
‘Bangladesh had about a decade of self-sufficiency in food and then this year there was an unexpected shortfall due to untimely and recurrent flooding. Some adjustment in import policy immediately made food readily available to the consumers.’
She mentioned that Bangladesh has increased its food production from 11 million tons in 1971 to 39 million tons in 2017 although one third of arable land has been lost in the meantime.
‘From 2008 it has been an increase of 9 million tons. This was possible as we reached agri-inputs to the farmers with heavily subsidized prices, and soft and collateral-free loans were made available to the landless farmers.’
Sheikh Hasina said that Bangladesh used all options that ICT could offer to overcome the crisis. ‘At present ICT is helping Bangladesh to accelerate the efficiency and precision of research, particularly on issues related to climate change.’
Noting that Bangladesh is fourth largest producer of sweet water fish in the world, she said the total fish production reached up to 41.34 lakh MT in 2016-17 due to fisheries-friendly policies. ‘This has contributed to self-sufficiency in fish production.’