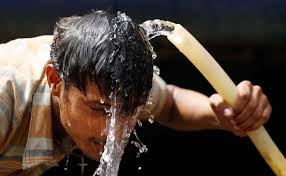 A heatwave has killed 65 people in Pakistan’s southern city of Karachi over the past three days, a social welfare organization said on Tuesday, amid fears the death toll could climb as the high temperatures persist.
The heatwave has coincided with power outages and the holy month of Ramadan, when most Muslims do not eat or drink during daylight hours. Temperatures hit 44 degrees Celsius (111 Fahrenheit) on Monday, local media reported.
Faisal Edhi, who runs the Edhi Foundation that operates morgues and an ambulance service in Pakistan’s biggest city, said the deaths occurred mostly in the poor areas of Karachi.
“Sixty-five people have died over the last three days,” Edhi told Reuters. “We have the bodies in our cold storage facilities and their neighborhood doctors have said they died of heat-stroke.”