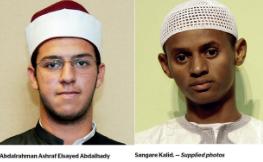 While most memorisers start learning the Quran at the age of eight and sometimes even at six, an Egyptian contestant began his journey with the Holy Quran when he was just four.
His family well-versed with the Quran, especially his father, was a big support to the now 17-year-old Abdalrahman Ashraf Elsayed Abdalhady who is a grade 12 student in an Azhari institute, scientific section. “My elder brother and sister have also memorised the holy Quran in full,” said Abdalhady.
Showing exceptional performance in several contests, Abdalhady has been nominated for participation in the Dubai International Holy Quran Award this year by the Ministry of Awqaf in Egypt.
Abdalhady believes it is an honour for him to be here in Dubai and compete in the 19-year-old global competition which has over 80 contestants this year. “It is so inspiring to see this big number of young memorisers from around the planet,” he said, wishing to be a dentist in the future.
Though 18-year-old Sangare Kalid of Cote Divoire started his journey with the Quran a little bit later when he was 12, he managed to complete learning it when he was 14.
“I am an addict to reciting and memorising the Quran. It is the real and genuine source of happiness in life and the Hereafter,” he said, noting that he used to learn the holy Quran day and night, and keep revising so as not to forget it.
Showing excellent performance in local Quran contests, Kalid was nominated for participation in the Dubai International Holy Quran Award. “This is actually my second international challenge after I competed in the Kuwait International Holy Quran Award last year.”
Sayed Hassan Fathi of Singapore who is 14 years old said he started memorising the Quran in 2008 and completed memorisation in three years. “My mother was the backbone of my holy Quranic journey, as she always supported me.”
Also, living in a family well-versed in the holy Quran was also helpful to Fathi. “My younger sister has memorised 20 parts of the Quran while my younger brother has learnt 14 parts by heart.”
Following the activities and events of the Dubai international Holy Quran was Fathi’s favourite hobby in the few years. “It was a day and night sweet dream for me to be here,” he said, wishing to be a Quran teacher and scholar in the future.
by: Ahmed Shaaban, Senior Reporter, Khaleej Times