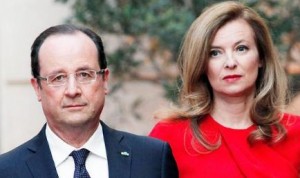 French President Francois Hollande on Saturday told AFP he has split with his longstanding partner Valerie Trierweiler after his affair with an actress nearly 20 years his junior.
The announcement came after a day of rumors in the French media that Hollande would formally announce the rupture on Saturday.
Saying he was speaking as a private individual, Hollande announced: “I wish to make it known that I have ended my partnership with Valerie Trierweiler.”
Trierweiler, 48, remains holed up in a presidential residence in Versailles after leaving hospital last Saturday, where she was treated for a bout of “tiredness” brought on by press revelations of Hollande’s affair with actress Julie Gayet.
Trierweiler is due to fly to Mumbai on Sunday for a charity trip in her first public appearance since the scandal broke. An ACF spokeswoman told AFP the trip “was confirmed this morning by Ms. Trierweiler’s office.”