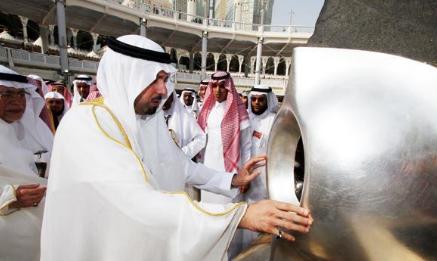 On behalf of the Custodian of the Two Holy Mosques King Salman, Prince Khalid Al-Faisal, Advisor to the Custodian of the Two Holy Mosques and Governor of Makkah region washed the holy Kaaba in the Grand Holy Mosque Sunday.
The Prince and his companions washed Kaaba with Zamzam water mixed with rose water.
A number of princes, ministers, officials, members of Islamic diplomatic corps accredited to the Kingdom, and citizens took part in the washing ceremony.