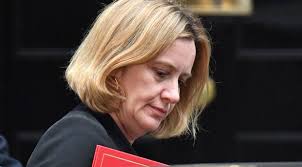 Amber Rudd has resigned as home secretary, as the government struggles to contain the fallout from the Windrush generation scandal.
A statement from Downing Street said Theresa May had accepted the home secretary’s resignation.
Rudd’s handling of the crisis has been heavily criticised, with over 200 MPs signing a letter accusing her of making up immigration policy “on the hoof” in an effort to overcome the scandal.
It was the beleaguered Rudd’s insistence that she knew nothing of Home Office targets for immigration removals, which was later undermined by documents, including a letter she had written to Downing Street and leaked to the Guardian, that drew the most criticism.
After facing a barrage of calls to resign she finally announced her decision to quit on Sunday.