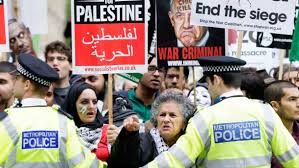 Hundreds of people gathered Tuesday in front of the British prime minister’s Downing Street office in London to protest the killing of Palestinian demonstrators in Gaza by Israeli forces.
At the emergency demonstration called by the Palestine Solidarity Campaign (PSC), Palestinians and activists urged the UK government to condemn the killings.
“Gaza, Stop the Massacre”, “End the Siege”, and “Stop Israeli State Slaughter,” read some of the placards held by protesters.
At least 62 Palestinians were martyred and thousands more injured by Israeli forces along the Gaza border Monday amid protests to commemorate the 70th anniversary of Israel’s establishment — an event Palestinians refer to as the “Nakba” or “the Catastrophe” and to protest the relocation of the U.S. embassy from Tel Aviv to Jerusalem.
The demonstration in London followed a vigil held at Parliament Square for those who lost their lives in Gaza, which some MPs also joined.
Shortly before the demonstration began, Prime Minister Theresa May, speaking at a press conference with Turkish President Recep Tayyip Erdogan, called for an “independent and transparent” investigation into the loss of life in Gaza and the use of live rounds by Israeli forces.
“Thank you for standing up for the besieged people of Gaza,” the PSC quoted a speaker as saying during the demonstration.
“The siege needs to come to an end! There will never be peace until refugees can go home. There will never be peace without Jerusalem as the capital of Palestine.”
“The brutality of the Israeli Army has been laid bare for all to see. We stand in solidarity with the people of Palestine, but words alone are not enough,” Sinn Fein MP Chris Hazzard said at the demonstration.
“The international community cannot continue to stand idly by. Israel must be held to account for its illegal actions,” he said.
“Sinn Fein calls on the Irish government to take a lead internationally on this. There can be no impunity for barbaric state violence directed at peaceful protests.”
Hazzard also urged the Irish government to expel the Israeli ambassador and to move immediately to formally recognize the state of Palestine.
Since the border rallies began on March 30, more than 110 Palestinian demonstrators have been killed by cross-border Israeli gunfire, according to the Palestinian Health Ministry.
Similar protests were held in Birmingham, Bristol, Manchester, Cardiff, Glasgow, Newcastle, Nottingham, Oxford and Sheffield.