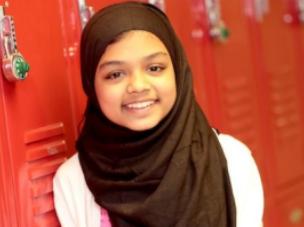 A tiny, thirteen-year-old Muslim girl has raised her voice against the Islamophobic stereotyping she is confronted with by classmates on a daily basis, urging school officials to add diversity courses to curriculums in an attempt to correct misconceptions spread through mainstream and social media.
“I face these stereotypes every day because I am a Muslim girl. It’s what I experience,” Sumaiya Mahee told Metro.us on Tuesday, June 9.
“Writing about this boosted my self-esteem because it gave me a way to tackle the stereotypes that I face. When I started talking about it, I realized I wasn’t alone and that other kids go through the same thing,” she added.
Living in a diverse and progressive city such as Cambridge, Massachusetts, Mahee was not safe from encountering prejudice on a daily basis for her faith and heritage.
Putting her daily challenges into words, Mahee authored the essay, “You’re Not Who You Say You Are: Beyond the Single Story,” an assignment for her combined social studies and English classes at Kennedy-Longfellow School, designed to teach all students that they each have been stereotyped – and how those stories are generally all wrong.
The essay went viral and was published in Public Radio International’s Global Nation Education section, demonstrating a self-awareness and cultural knowledge far beyond her young teen years.
“It’s hard to take in because I am viewed as a terrorist by people,” Mahee said.
She writes in her essay about the external identity forced upon her: “According to society and everything else going on in the world, I am not who I say I am. I am not an innocent girl who walks around not hurting the world. Because of violence, from the Boston Marathon bombings to the almost bomb that went off in New York by a Bangladeshi boy, I am apparently the “child” of the terrorists who did these acts.”
“My goal is to keep working to correct the stereotypes,” Mahee said.
“I don’t want other Muslim kids to grow up and have to face those and not be able to do anything.”
Facing daily offenses, Mahee wrote about reaching a boiling point after facing mistreatment day-after-day.
The moment came when she, her sister and best friend were walking home from the mosque around midnight one evening with their hijabs on when two men laughed and said, “Danger! It’s the Muslims!”
Mahee, boiling already, shouted back, “Wait till we come after you! You’re not going to survive any longer!”
The interaction with the two men was the dawning of a profound personal realization: Hate cannot be combated with hate.
Misconceptions
For young Mahee, media was to blame for a large share of increasing anti-Muslim sentiments by drawing Muslims as terrorists.
“If someone calls me a terrorist, I won’t choose the actions that I chose. I would tell other Muslim kids to tell people what a real Muslim is like,” Mahee said.
“Muslims are shown on TV as terrorists and it makes people think that that’s what a normal Muslim is.”
The essay came as a shock to Mahee’s English teacher Woodly Pierre-Louis, who initially rejected the idea of rising anti-Muslim sentiments.
“Here she is, this tiny little girl, and it amazed me that anyone could see her as a threat or a target of ridicule. I couldn’t believe anyone would comment like that at all.”
For now, Mahee sees hope in her push against the “Us vs. Them” mentality.
She believes schools need to start teaching diversity and encourage students to have open dialogues to foster a real cultural melting pot.
“It takes a long time to change people’s mindset,” Mahee said.
“Schools need to give students a way to see that we go through the same things, even though we have a different background. That’s the first step in making a change.
“I am Muslim and from Bangladesh. I have these two characteristics but that does not mean that I am a terrorist or someone who hurts society,” she added.
The United States is home to a minority of between six to eight million Muslims.
A US survey has also revealed that the majority of Americans know very little about Muslims and their faith.