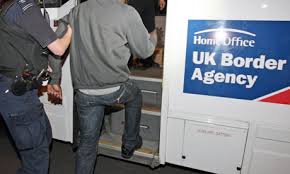 People who work illegally in England and Wales will face up to six months in prison, under proposals to be included in the forthcoming Immigration Bill.
The bill, to be introduced in the autumn, will also contain measures against takeaway restaurants and off-licences which employ illegal migrants.
Penalties will also include an unlimited fine and wages being seized.
Immigration Minister James Brokenshire said the government “would continue to crack down on abuse” of the system.
The government has made a series of immigration announcements over the summer of which this is the latest.
Takeaways and off-licences could lose their licences if they were found to be employing illegal workers.
Officials are also considering whether this provision should be extended to cover minicab drivers and operators.
The legal defence for other kinds of business discovered using illegal workers will also change.
They will no longer be able to claim they did not know a particular employee was not allowed to work – they will have to show that they carried out proper checks before taking them on.
The maximum sentence for employers found guilty will be raised from two to five years, in addition to the fines already in force. -BBC