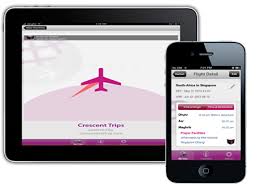 A Singapore-based company has launched an iPhone app alerting Muslims when to pray and in which direction they should face even when they’re 35,000 feet in the air. Travellers input the flight details and are provided with prayer times during their journey, as well as the direction of the Muslim holy city of Mecca.
Crescentrating, a firm that gives ” halal” or Islam-compliant ratings to hotels and other travel-related establishments, plans to make the free app, called Crescent Trips, available to Android smartphones within months, chief executive Fazal Bahardeen said.
The app also includes audio clips of prayers Muslims – required to pray five times daily at certain hours – recite when they travel.
” The Muslim traveller is probably the largest untapped market in the travel industry today,” Crescentrating chief operating officer Dany Bolduc said.
” It really isn’t catered to as well as it should be given the immense size and potential of this market.”
Spending by Muslim tourists is growing faster than the global rate and is forecast to reach US$192 billion a year by 2020, up from $126 billion in 2011, according to a study released last year by Crescentrating and DinarStandard, a US-based firm that tracks the Muslim lifestyle market.