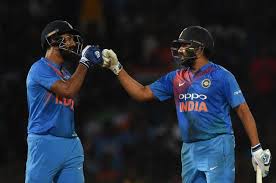 Dinesh Karthik hit 29 off just 8 balls to deny Bangladesh a remarkable win and give India the Nidahas Trophy on Sunday.
Chasing 167, India needed 34 runs from 12 balls when Karthik came to the crease and the batsman whacked 22 from the 19th over bowled by Rubel Hossain to ease the pressure.
The 18th over, bowled by Mustafizur Rahman, was magnificent to say the least, as he beat Vijay Shankar on four deliveries to concede just one in the over.
It meant skipper Shakib Al Hasan had to turn to part-time bowler Soumya Sarkar to bowl the decisive final over, where he had to defend 11 to seal the win.
The first ball was a wide followed by a dot while Karthik took a single in the next. Vijay now hit a four but gave a catch to Mehidy Hasan Miraz to await a breathtaking final ball where India had to hit a six.
And Karthik did exactly what was needed, breaking the hearts of the Bangladesh fans in yet another final. The Tigers have now lost in all the five finals they have played.
Skipper Rohit Sharma had earlier gave India hope with 56 off 42 balls, courtesy of four fours and three sixes, but Bangladesh bowlers kept striking every now and then to keep the Indians in check.
Manish Pandey and Lokesh Rahul added 28 and 24 respectively.
Rubel had a good match prior to that over, bagging the wickets of Rahul and Suresh Raina, while Shakib, Mustafiz and Nazmul Islam took one apiece.
Put into bat first, a commendable half century from Sabbir Rahman helped Bangladesh make 166 for 8.
Sabbir smashed seven fours and four sixes in his 50-ball 77-run innings after a sloppy start.
Washington Sundar drew the first blood with the score on 27, removing Liton Das (11) who gave a catch to Suresh Raina.
Yuzvendra Chahal then dealt the biggest blow, sending Tamim Iqbal (15) and Soumya Sarkar to the pavillion in the space of three balls.
The bowler also ended Mushfiqur Rahim’s innings on 9 and a miscommunication between Sabbir and last match’s hero Mahmudullah meant the latter could make no more than 21.
Captain Shakib Al Hasan failed to manage double figure as well, but Sabbir scored big for the first time in this tournament to give them team a defendable score.
Mehidy Hasan Miraz slammed two fours and a six in a late cameo to make 19 off 7, which could have been the difference had Karthik not stole the show late on.
The wicketkeeper-batsman was named the ‘Man of the Match’ while Sundar was adjudged the ‘Player of the Series’.