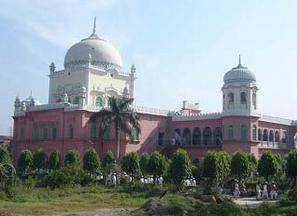 It was 15thMuharram A.H 1283 (May 30, 1866), a very important day in the Islamic history of India when the establishment of Darul Uloom was laid in the land of Deoband, a small town in Uttar Pradesh. That day, the first stone for the resurgence of Islamic sciences was laid.
This school was founded by well known learned scholars Maulana Rasheed Ahmad Gangohi, Maulana Dhol-Fiqar Deobandi, Haj Sayyid Muhammad Aabid Deobandi, Maulana Yaqoub Nanotwi, Maulana Rafee- ud-Deen and Maulana Fazl-ur-Rahman Uthmani Deobandi under the leadership of Imam Muhammad Qasim Nanotwi (may Allah have mercy on all of them). It is the largest university in the Indian subcontinent dedicated for the spread and circulation of Islam and the biggest platform to learn about Islamic Sciences.
The stability of this institution is a result of strenuous effort and struggle of Indian Muslims. The time when the Darul Uloom Deoband, was established, the old madrassas in India had almost become inexistent, and the condition of whatever that had survived, the depredations of time was not better than that of a few glow-worms in a dark night.
Apparently, it so looked like it was time for Islamic sciences to pack up from India. Even then, under these circumstances, some men of Allah and great doctors, through their inner light, had foreseen the approaching danger. They knew it too well that nations have accomplished their status through knowledge only. So, without relying upon the government of the time, they founded the Darul Uloom, Deoband with public contributions and co-operation.
For one hundred and fourteen years, it has been rendering, as per the devout ancestors approach, the right-type of academic training to the Muslims. One of the principles that Hazrat Nanautavi (may his secret be sanctified) wished-for for the Darul Uloom and other religious madrassas is to be run trusting in Allah and with public contributions. Its over 15,000 graduates have gone on to found many similar madrassas across  South Asia and have gone on to the higher foundations to disseminate their knowledge across borders.
Darul Uloom Deoband’s curriculum is based on 17th century Indo-Islamic syllabus known as Dars e Nizami. The curriculum teaches fiqh, shari’ah, tafseer, tasawwuf, Arabic literature, etc. and various other studies. Such accomplished scholars have come out from the Darul Uloom in every period that they, in harmony with the demands of religious needs of the time, have rendered respected services in propagating and spreading correct religious beliefs and religious sciences. These gentlemen, not just in India but around the globe, are busy in performing religious and academic services. They have received an important status for religious guidance of the Muslims.
More than a teaching institution
They helped people not just spiritually but also politically, that whenever during the British regime the Government tried to make any law, which could have had a conflict with the Islamic Shari’ah, the Ulema of Deoband opposed it tooth and nail and gave proof of their devotion to duty. On the Sarda Act and the Waqf Bill, they did not hesitate at all in presenting the Islamic point of view with daring and clarity.
The Ulama of Deoband, with their sound determination and trust in Allah, have always been not only in the prime rank of those who have survived and fought the movement for the independence of India but they have also frequently been in the lead of this movement for independence; and if it is seen more thoughtfully and fairly, they were the first persons who initiated this idea.
They were the ones who lit the lamps of the Holy Book and the Sunnah, and have propagated guidance to countless people who, according to the conditions and time, guided the Muslims in the different aspects of life.
Darul Uloom, Deoband, has played a great part in investing the Muslims thoughts and views with freshness and sacredness have quenched their thirst from it. On the model of Darul Uloom sprang up many religious and academic springs, each having its own school of thought modeled over Darul Uloom’s.  Darul Uloom, for any perceptive reader will appear as not merely an old-type teaching institution but a grand movement for the renaissance of Islam and the survival of the community.
Very little attention has been paid to the benefit of these religious schools that on account of them, the condition of millions of Muslim families has been bettered in many ways.
Even as in the past, the Darul Uloom, Deoband, has rendered invaluable services to the cause of Islam, the Muslims and the religious sciences, It is hoped that in future, it will continue to discharge the obligation of inciting the Muslims power of action, of strengthening the faiths and of preaching and propagating Islam far and wide.
By Raisa Ladji
Freelance Writer- Mumbai