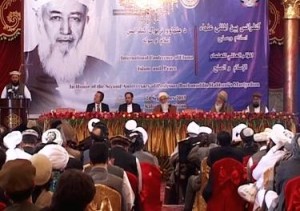 The High Peace Council (HPC) on Tuesday organized a conference for Islamic scholars from across the globe in Kabul city, to discuss the ways in which Islam can help in bringing peace and stability into Afghanistan. At the conference titled- “International Conference of Islamic Scholars and Peace,” the scholars urged the Taliban to stop killing innocent Muslims. They warned the Taliban saying that killing is not Jihad; it is “Un-Islamic.”
“Killing Muslims and suicide attacks are forbidden in Islam. There should be no violence,” said Sheikh Muhammad Faalah Altayi, Advisor to the Speaker of Iraq’s Parliament.
Several Pakistani religious scholars, who participated in the conference condemned the suicide attacks and called it “Un-Islamic.”
“Islam does not allow killing of people. Suicide attacks should be stopped,” said Dr. Ahmad Azhare, President of the Dawat Academy International Islamic University in Islamabad.
“Killings and suicide attacks are forbidden in Islam. Our brothers should join the government and have a peaceful life,” said Mohammad Sallar, the deputy head of the Ahlul Bayt World Assembly.
Meanwhile, the Afghan participants in the conference urged the Islamic countries to help in ending the ongoing violence and bring peace and stability back into Afghanistan.
“Peace should be considered as a priority. We request the Islamic countries to assist us in this regard,” said Salahuddin Rabbani, the head of the HPC.
Abdul-Rab Rasool Sayyaf, a Jihadi leader, called the actions of the Taliban “un-justified” because when the insurgents launch attack on the foreign forces, several innocent lives are lost. He requested the Taliban to stop killing Afghans. Sayyaf during his speech asked the other Islamic countries to cite reasons for sending foreign troops into Afghanistan.
“I am asking who brought the foreigners. None of the Islamic member countries of the United Nations opposed the decision to send foreign forces into Afghanistan? All Islamic countries voted in favor of the decision. When Afghans were not a part of that voting process, then why every day innocent Afghans are getting killed?” said Sayyaf.
Sayyaf further added that the foreign entities are responsible for these killings and blamed them for disrupting peace in the country.
“Those who are killing innocent Afghans, they do not know anything about Islam. Foreign entities are responsible for the killings,” Sayyaf added.
Among the several steps have been undertaken to accelerate the stalled peace process, Kabul recently found out two more ways, which include- request the release of Taliban’s second-in-command Mullah Baradar, and holding an international conference for the Islamic scholars from around the world. However, the outcome of all these steps is yet to be seen. -Written by Sayed Sharif Amiry