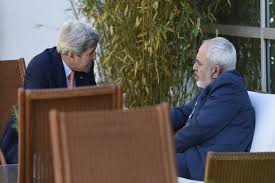 Iran said Saturday it would be “out of the question” for the UN atomic watchdog to question Iranian scientists and inspect military sites as part of a final nuclear agreement with world powers.
“Interview with scientists is completely out of the question and so is inspection of military sites,” senior Iranian negotiator Abbas Araghchi told state television.
The head of the UN’s atomic watchdog Yukiya Amano told AFP in an interview this week that if Iran signs a nuclear deal with world powers it will have to accept inspections of its military sites.
Araghchi’s comments come as Iran’s Foreign Minister Mohammad Javad Zarif and his US counterpart John Kerry were holding crucial talks in Geneva to try and hammer out a historic nuclear deal ahead of a June 30 deadline.
Iran’s supreme leader Ayatollah Ali Khamenei last week ruled out allowing nuclear inspectors to visit military sites or the questioning of scientists.
And Zarif has said the Additional Protocol of the Nuclear Non-Proliferation Treaty which Iran has accepted allows “some access” but not inspections of military sites.
“Anyway we are continuing our negotiations in the framework of procedures predicted by the Additional Protocol. There isn’t and hasn’t been any agreement yet,” said Araghchi.
“One of the questions we are discussing is how the Additional Protocol should be implemented,” he said.
The protocol allows for snap inspections of Iran’s nuclear facilities, and if required, of its military sites.
But Iran insists that such access should be regulated and must be justified.