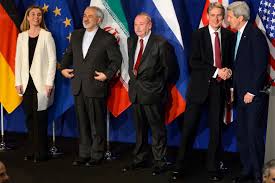 Iran and six world powers have agreed the framework of a potentially historic deal aimed at curbing Tehran’s nuclear drive, but Israel warned that any binding future pact would threaten its survival.
The Thursday agreement marked a major breakthrough in a 12-year standoff between Iran and the West — which has long feared Tehran wants to build a nuclear bomb — and raised hopes the deal could help stability in the Middle East.
US President Barack Obama welcomed the “historic understanding” with the Islamic republic after decades of hostility, but cautioned that more work needed to be done.
“If Iran cheats, the world will know it,” he said in a televised address from the White House.
Under the framework, Iran agreed to sharply curtail its nuclear programme in return for the lifting of sanctions that have crippled the country’s economy.
Hundreds of Iranians took to the streets of Tehran in celebration after the agreement was announced, with drivers sounding their horns in approval along the capital’s longest street, Val-e-Asr Avenue.
But Iran’s arch-foe Israel, widely assumed to have atomic weapons of its own, said the deal would increase the risks of nuclear proliferation and of “a horrific war”, with Israeli Prime Minister Benjamin Netanyahu telling Obama the deal “would not block Iran’s path to the bomb. It would pave it,” according to an Israeli spokesman.
“A deal based on this framework would threaten the survival of Israel,” Mark Regev added in a series of tweets, citing Netanyahu.
The main outlines agreed after eight days of talks that sometimes went
through the night in the Swiss city of Lausanne now have to be finalised in a highly complex agreement by June 30.
Failure may set the United States and Israel on a road to military action to thwart Iran’s nuclear drive and keep Tehran out in the cold on the international stage.