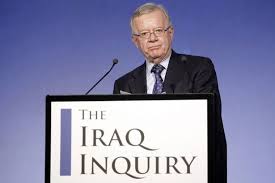 Iraq inquiry chairman Sir John Chilcot was expected to confirm in a letter to David Cameron that it would be delayed until after the election on 7 May.
The inquiry began its work in 2009 and held its last public hearing in 2011.
Deputy Prime Minister Nick Clegg said the delay was “incomprehensible”.
The Liberal Democrat leader said that the public would assume the delay was caused by those criticised in the report attempting to “sex it down”.
The prime minister is to write a letter to the inquiry to “restate his frustration” at delay in publication and to say the report should have been published before the election, sources have told the BBC.
The inquiry has been looking into the reasons for the UK’s involvement in the 2003 US-led invasion which toppled Saddam Hussein and the aftermath of the conflict, which saw UK troops remain in Iraq until 2009.