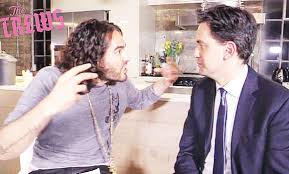 Russell Brand doesn’t vote, but his interview with opposition leader Ed Miliband has enlivened a staid, stage-managed British election campaign.
The bawdy comedian turned anti-capitalist campaigner conducted the interview at his London loft and released an edited version Wednesday on his YouTube channel, which has more than 1 million subscribers.
In the exchange, Miliband disputed the comedian’s oft-repeated view that bankers hold more power than politicians and voting doesn’t change anything.
“Progress comes from people demanding change, politics responding, not all the way, and people pushing for that change to carry on,” Miliband said. “But without politics, without government, the change doesn’t happen.”
Brand, a standup comic and former husband of singer Katy Perry, has forged a new career as political activist, campaigning for London tenants threatened by gentrification and writing the best-selling manifesto “Revolution.” He also appears in financial-crisis documentary “The Emperor’s New Clothes,” directed by Michael Winterbottom.
Opponents of Miliband’s center-left Labour Party criticized his decision to be interviewed by Brand, who regularly disparages politicians and was once suspended by the BBC for leaving crude phone messages on an actor’s answering machine.
Prime Minister David Cameron said “Russell Brand’s a joke. Ed Miliband, to hang out with Russell Brand, he’s a joke.”
Others even criticized Miliband’s accent in the interview, claiming he dropped consonants to sound more “street” than he really is.
But Miliband said he wanted to reach the 7 million Britons who aren’t registered to vote. The interview quickly became a social media talking point, with its own hashtag — #Milibrand.
“The crucial thing it seems to me, whatever people think of Russell Brand, is to engage with the people who are not engaged in this election,” Miliband told supporters in London.
British voters go to the polls May 7. Polls suggest neither Cameron’s Conservatives nor Miliband’s Labour will win a majority of House of Commons seats.