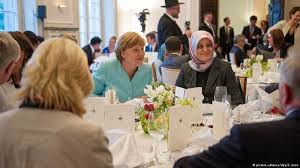 The German Chancellor Angela Merkel, in a speech at a Ramadan iftar hosted by Federal Integration member, Aydan Ozoguz, has said that there is no doubt that Islam belongs in Germany and will remain so.
Taking part in an official iftar for the first time, Merkel also said that other steps will be taken to form bonds with Muslim groups and that actions taken in the name of Islam, in particular violence has caused concern.
Despite the violence, Merkel reiterated that it was not correct to hold suspicion against Muslims or to discriminate against them because of the actions of others.
The Chancellor also highlighted that the majority of Muslims in Germany were law abiding citizens who abided by the constitution.
Merkel condemned violent acts against all places of worship saying, whether attacks took place in a “synagogue, a mosque or a church, all actions against places of worship, is considered an act of violence to us all”.