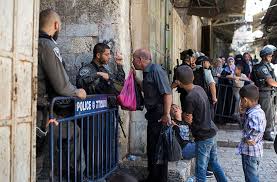 Israeli police on Friday closed the gates of occupied East Jerusalem’s flashpoint Al-Aqsa Mosque compound following the brutal killing of a Palestinian baby in a village near the northern West Bank city of Nablus, a Palestinian official said.
“Israeli police stepped up security measures around the flashpoint mosque, deploying hundreds of troops in surrounding areas and erecting roadblocks at the entrances of the mosque,” Sheikh Azzam al-Khatib, director-general of Muslim Endowments and Al-Aqsa Affairs, told Anadolu Agency.
“Only men over 50 and women of all ages were allowed to enter the mosque after undergoing rigorous inspection,” he added.
For Muslims, Al-Aqsa represents the world’s third holiest site. Jews, for their part, refer to the area as the “Temple Mount,” claiming it was the site of two prominent Jewish temples in ancient times.
Israel occupied East Jerusalem during the 1967 Middle East War. It later annexed the city in 1980, claiming it as the capital of the self-proclaimed Jewish state in a move never recognized by the international community.