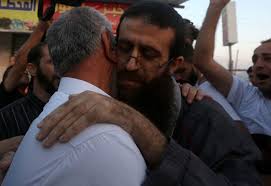 Israel on Sunday released a Palestinian prisoner who staged a 56-day hunger strike which brought him near death in a protest against the controversial procedure allowing detainees to be held indefinitely without charge.

Khader Adnan was greeted to a hero’s welcome in his village near Jenin, in the northern West Bank, that included fireworks, songs and flags for Islamic Jihad, the militant movement to which Israel says he belongs.

The bespectacled 37-year-old, thin and with a long beard, was released before dawn in an apparent effort to limit attention to the move, initially expected at midday.

A spokeswoman for the Israeli Prison Authority confirmed the release but provided no other details.

Islamic Jihad congratulated Adnan in a statement for his “victory” and said a celebration was being organized in his village of Arraba for Sunday evening.

Adnan had been held for a year under administrative detention, which allows imprisonment without charge for renewable periods of six months indefinitely.

Of the 5,686 Palestinian prisoners currently held by Israel, 379 are detained under the procedure.

His hunger strike, which had brought him near death by the time it concluded last month, had sparked warnings from the Palestinian government that it held Israel responsible for his fate.

Regular protests were organized in support of him.

Adnan ended his hunger strike on June 28 after Israel agreed to release him, at which point he was transferred to an Israeli hospital.