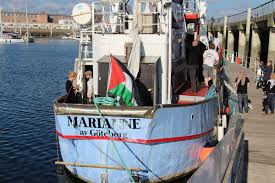 Israeli forces have blocked the Third Gaza Freedom Flotilla and forced the ships participating in it to land in the Israeli port of Ashdod, the Israeli military said in a statement on Monday.
According to the Israeli statement, there was no violence in the incident. However, the official Twitter account of the flotilla (@GazaFFlotilla) said that the Israeli Defense Forces intercepted and captured the Marianne. One of the last tweets sent from the account said: “Israeli occupied forces intercepted Marianne. The boat is currently en route to Ashdod port #SOSFreedomFlotilla”.
A video tweet on behalf of Joel Opperdoes, captain of Marianne said: “If you see this video, @IDFSpokesperson attacked us”
Another tweet said: “Rachel, Vittorio and Juliano II made contact. Everyone OK. Returning to port as planned. #FreedomFlotilla”.
The ships passengers included about 35 Europeans, including an Israeli Arab parliamentarian and former president of Tunisia Moncef Marzouki. The Israeli forces prevented the activist ships, which carried food and aid, from landing in the blockaded Palestinian territory, the Gaza Strip.
The Israeli statement said that the government had “exhausted diplomatic channels,” in an attempt to head off the flotilla, before taking military action.
Israeli Prime Minister Benjamin Netanyahu issued a statement on Monday saying that the flotilla was “a demonstration of hypocrisy” and support for Hamas, and said Israel’s actions were in accordance with international law.
The flotilla was invited by Palestinians through numerous organizations, which works to help the wounded, homeless, unemployed and displaced due to Israeli military operations, according to the statement.
The coalition said its aim was not to act against Israel but against its occupation and added that it would not be needed had governments around the world reacted to the Israeli government’s acts against Palestinians.
The Third Freedom Flotilla had made several stops on its way to Gaza, in Greece, Spain and France.
Boats from the Canadian Boat to Gaza, Greece Ship to Gaza, Freedom Flotilla Italia, Norway Ship to Gaza, South Africa Palestine Solidarity Alliance, Spain Rumbo a Gaza and Turkey’s Humanitarian Relief Foundation (IHH) are part of the third attempt.
The first Gaza Freedom Flotilla expedition in May 2010 ended in tragedy after Israeli commandos killed eight Turkish nationals and an American of Turkish origin in a raid on the flotilla ship, Mavi Marmara. Another person of Turkish nationality died in a hospital in 2014 after being in coma for almost four years.
The second Gaza Freedom Flotilla took place in 2012. It too was turned back.