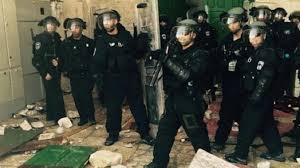 Israeli occupation forces entered one of Islam’s holiest places Jerusalem’s Al-Aqsa mosque on Sunday, police said.
Israel says its forces were pursuing Palestinian youths who were planning ‘ a riot’, and that after their brief foray into the mosque, they withdrew and the area was quiet.
Al Araby reports that there  was also a demonstration at the main weekly prayers on Friday when outraged Muslims protested over insulting public comments about the Prophet Mohammed made by a Jewish woman.
Israel routinely imposes age restrictions on Muslim worshippers.
After Israeli police entered the mosque in November, Jordan one of the very few Arab states with diplomatic relations with Israel, recalled its ambassador