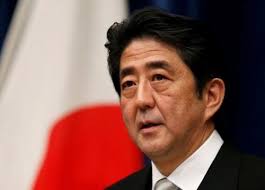 Japanese Prime Minister Shinzo Abe said Tuesday his country has no plans to move its embassy in Israel from Tel Aviv to Jerusalem, according to Palestine’s official news agency.
The statement came during Abe’s official meeting with Palestinian President Mahmoud Abbas in Ramallah, WAFA reported.
The Japanese leader affirmed his country’s support for a political process based on the principle of a two-state solution and its readiness to contribute to any effort to achieve peace, WAFA said.
He stressed the continued support of Japan for projects that contribute toward the building of Palestinian state institutions and infrastructure.
Abbas also stressed that the Palestinian side was and is ready to cooperate for the success of any international effort aimed at coming up with a political process based on United Nations resolutions and the principle of the two-state solution for the establishment of an independent Palestinian state with East Jerusalem as its capital based on the 1967 borders.
He reiterated his call on the UN Security Council to hold “an international peace conference this year that would establish an international multilateral mechanism to oversee the political process” while noting that the U.S. has abandoned its role as “an honest peace broker” by recognizing Jerusalem as the capital of Israel and deciding to move its embassy there.
Last December, U.S. President Donald Trump sparked an outcry across the Arab and Muslim world by recognizing Jerusalem as Israel’s capital and vowing to relocate Washington’s embassy to the city.
Jerusalem remains at the heart of the Palestine-Israel conflict, with Palestinians hoping that East Jerusalem — occupied by Israel since 1967 — might eventually serve as the capital of an independent Palestinian state.