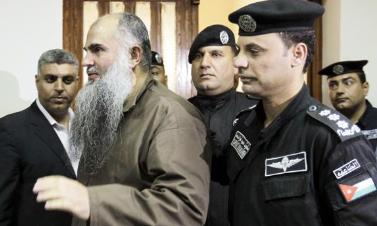 A Jordanian court acquitted radical preacher Abu Qatada of terrorism charges Wednesday and ordered the release of the Palestinian-born preacher, who was deported from Britain last year after a long legal battle.
Abu Qatada was found innocent of the charge of conspiring to attack tourists in Jordan during millennium celebrations and granted “immediate release,” a judicial source told AFP.
The source said the court found there was insufficient evidence to convict Abu Qatada, who had pleaded not guilty.
Abu Qatada broke into tears in court following the verdict, while members of his family applauded and shouted Allahu Akbar (God is Great).
His lawyer, Hussein Mubadeen, called the verdict “a success for Jordanian justice.”
Britain’s interior ministry said there was no chance of Abu Qatada returning to the United Kingdom.
“It is right that the due process of law has taken place in Jordan. The UK courts agreed that Abu Qatada posed a threat to national security in the UK, so we are pleased that we were able to remove him,” a ministry spokesman said.
“Abu Qatada remains subject to a deportation order and a United Nations travel ban. He is not coming back to the UK.”
Abu Qatada — once described as the right-hand man in Europe of late Al-Qaeda founder Osama Bin Laden — was deported from Britain to Jordan in July 2013 after a 10-year legal fight.
He faced two retrials after he was convicted in his absence on the charges in 1999 and 2000 and sentenced to death, later commuted to life imprisonment.
In the first retrial in June he was acquitted of plotting a 1999 attack on the American school in Amman.
Born Omar Mahmud Mohammed Otman in Bethlehem in 1960 in the now Israeli-occupied West Bank, Abu Qatada is a Jordanian national because the town was part of Jordan when he was born.
The burly father of five was one of the most prominent of a set of extremist preachers based in London in the 1990s and 2000s.
Videotapes of Abu Qatada’s sermons were allegedly found in the Hamburg flat of Mohammed Atta, the ringleader of the September 11, 2001 attacks on the United States.
Abu Qatada arrived in Britain in September 1993 with his family on a forged United Arab Emirates passport and claimed asylum on the basis that he had been tortured in Jordan.
He gained refugee status the following year but his fiery oratory soon brought him to the government’s attention, as he advocated the killing of Jews and praised attacks on Americans.
After Britain adopted new anti-terror laws to detain security suspects without charge following the September 11 attacks, he was arrested in 2002 and faced years in prison or under tough bail conditions.
Britain began attempts to deport him in 2005 but was stymied by appeals all to the way to the European Court of Human Rights, which ruled in 2012 that Britain could not deport him because evidence from two of his co-accused in Jordan was likely to have been obtained through torture.
He was eventually deported last year after Britain and Jordan formally approved a treaty guaranteeing that evidence obtained by torture would not be used against him in any retrial.