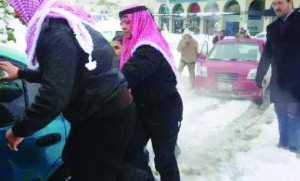 Jordan’s King Abdullah II helped a group of men push a man’s car after it got stuck in the snow in Amman, a video posted online on Saturday showed.
The king was seen helping the men and smiling after the car was successfully moved. The video appeared to be taken by a mobile camera.
Jordan was one of the Middle Eastern countries struck by snowstorm Alexa, which began on Wednesday, hiting large parts of Jordan, Egypt, Syria and Lebanon.
In Jordan, airlines suspended their trips and many roads were blocked in the capital. Armed forces have intervened to reopen the roads.
The directorate of general security has also advised citizens to remain indoors.