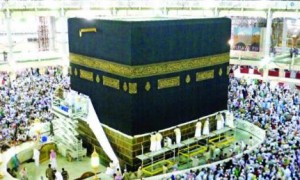 The black apparel (kiswa) covering the Holy Kaaba was folded three meters up off the ground on Wednesday to prevent pilgrims from touching and damaging it during the Haj season, the Presidency of the Two Holy Mosques Affairs said in a statement.
“The area has been covered by a white cloth, which is two meters high and 47 meters wide,” the statement said, adding that this is done just before the peak of the Haj season every year.
“We have done this as a precautionary measure to prevent people from tampering with the cover, as many people tend to touch the cover during tawaf (circumambulation around the Kaaba),” said Mohammed bin Abdullah Bajouda, director-general of the Kaaba Cover Factory.