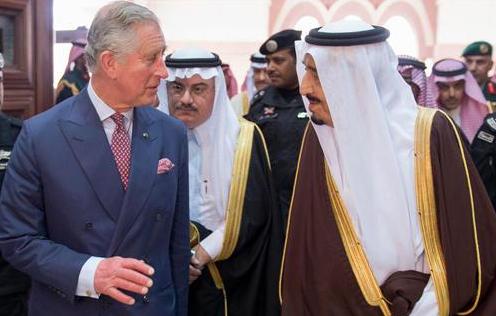 Saudi King Salman bin Abdulaziz received on Tuesday Britain’s Prince Charles, who is on a six-day tour of the Middle East.
King Salman and the Prince of Wales exchanged cordial talks and reviewed bilateral relations between Saudi Arabia and the United Kingdom during a meeting at the King’s palace in Riyadh, according to the Saudi Press Agency.
Upon his arrival earlier today, Prince Charles was received by Saudi Crown Prince Muqrin bin Abdulaziz.
They both held a meeting where they reviewed overall regional and international developments, the state-run agency added.
The meeting was also attended by other senior Saudi officials, including Riyadh Governor Prince Faisal bin Bandar and Prince Miteb bin Abdullah, the minister of National Guard.
Prince Charles has already visited Jordan and Kuwait and is expected to visit Qatar and the United Arab Emirates.