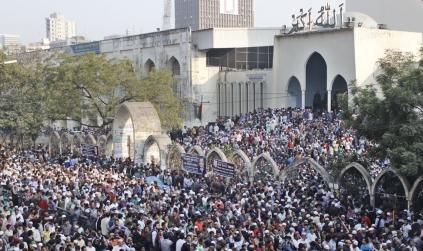 Arafat Rahman Koko, the younger son of former president Ziaur Rahman and BNP chairperson Khaleda Zia, was laid to rest at Banani Graveyard on Tuesday.
Koko was buried around 6:40 pm following his second and final namaze-Janaza at Baitul Mukarram National Mosque.
Apart from family members, friends and well-wishers and hundreds of people, including senior BNP leaders, were present during the burial.
His first namaz-e-janaza was held in Malaysia on the premises of the country’s National Mosque Negara on Saturday. The Imam of the mosque led the janaza.
Koko’s second and the final namaz-e-janaza was held at Baitul Mukarram National Mosque after Asr prayers on Tuesday.
Khatib of the National Mosque Prof Mohammad Salahuddin conducted the janaza at 5.13 pm amid tight security and subsequently offered a munajat seeking salvation of Koko’s departed soul.
Thousands of people from the all walks of life attended the janaza that swelled from Paltan crossing to Janata Bank head office on one side and Paltan Crossing-GPO intersection to Gulistan Cinema Hall o the other.
Bikolpa Dhara president AQM Badruddoza Chowdhury, Krishok Sramik Janata League president Abdul Quader Siddique, Liberal Democratic League president Oli Ahmed, BNP standing committee members, including Moudud Ahmed, Lt Gen (retd) Mahbubur Rahman, Rafiqul Islam Miah, Dr Abdul Moyeen Khan, Nazrul Islam Khan, vice chairman Shah Moazzem Hossain, Chowdhury Kamal Ibne Yusuf, Altaf Hossain Chowdhury, Abdullah Al Noman, Hafizuddin Ahmed, BNP chairperson’s advisers, senior leaders of BNP and its associate bodies and top leaders of the BNP-led 20-party alliance, among others, joined the janaza.
After the janaza, the body was kept at the South Plaza of the national mosque until 5:45pm as people paid their last respects to him.
Later, the mortal remains of Koko were taken to Banani Graveyard and buried there.
Though BNP had sought permission for the burial of the Khaleda’s younger son at Banani Army Graveyard in the capita, it was turned down by the authorities in the morning.
Kalyan Party chairman Maj Gen (retd) M Ibrahim, on behalf of the BNP-led 20-party alliance, at a press briefing at BNP chairperson’s Gulshan political office said, “We’ve got disheartened as we were not given the permission to bury the body (of Koko) at the army graveyard despite fulfilling all the criteria.”
Denied permission to bury him at Banani Army Graveyard, Zia family members and BNP leaders later decided to bury him at the Banani Graveyard. Earlier in the day, the flight carrying the body of Koko landed at Hazrat Shahjalal International Airport around 11:45am.
BNP chairperson’s personal assistant Mahbub Al-Amin Dew and one of Koko’s brother-in-laws received Koko’s body at the hangar gate No 8 at Hazrat Shahjalal International Airport and left the airport in an ambulance of a private hospital under a police escort around 12:20pm.
From the airport an ambulance of Alif medical service carrying Koko’s body entered the compound of the BNP chairperson’s Gulshan office at
1:39 pm.
Hundreds of BNP activists gathered around the office to pay their tributes. However, officials at the BNP chief’s political office didn’t allow anyone except Khaleda’s relatives to the office.
The BNP chief appeared in the room where the body was kept around 1.55 pm along with the wives of her brothers Sayeed Iskander and Shamim Iskander from the first floor of her office.
Khaleda was there beside the coffin of his son until it was taken out of the room around 2:45 pm as her relatives tried to console the grief-stricken mother.
She touched the body crying, “My Koko, My Koko”. Khaleda followed the coffin up to the car passage of her office and kept on crying as the body was taken out for janaza. The body reached the Baitul Mukarram National Mosque around 4.45 pm.
Khaleda last met her younger son in Bangkok in June 2013 on her way to the United States.
Arafat Rahman Koko died in Malaysia on Saturday at the age of 45.