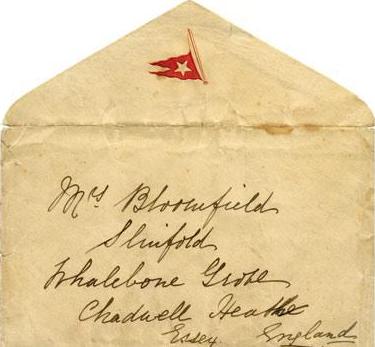 A letter written by a passenger on the Titanic describing the “wonderful passage” — hours before the ship hit an iceberg — has sold at auction for 119,000 pounds ($200,000).
Auctioneer Andrew Aldridge said the handwritten note was bought by an anonymous telephone bidder at an auction in Devizes, western England.
The price, which includes a fee known as the buyer’s premium, topped the pre-sale estimate of 100,000 pounds.
The letter was written by second-class passenger Esther Hart on April 14, 1912.
“The sailors say we have had a wonderful passage up to now,” she said in the note to family in England.
Hours later the passenger liner described as “practically unsinkable” hit an iceberg and sank, killing more than 1,500 people.
Hart was among about 700 survivors.
Hart survived, and so did the letter, which is expected to sell for up to 100,000 pounds ($168,000) at an auction in England on Saturday.
The handwritten note on White Star Line notepaper was tucked inside the pocket of a sheepskin coat Hart’s husband Benjamin gave her as he put Esther and their daughter Eva in a lifeboat. The family had been traveling from England to Canada, where they planned to settle.
The letter includes a postscript from Eva Hart, then aged 7: “Heaps of love and kisses to all from Eva.”
Benjamin Hart was among passengers and crew killed when the ship sank. Esther and Eva were rescued, along with some 700 others.
Esther Hart died in 1928.
Eva Hart, who died in 1996, became a prominent Titanic survivor, critical of attempts to salvage the ship, which she considered a mass grave.
She described the voyage, and her mother’s letter, in an autobiography, “Shadow of the Titanic.”
Auctioneer Andrew Aldridge said the letter was “quite simply the jewel in the crown of Titanic manuscript ephemera.”
Fascination with the Titanic remains strong a century after the disaster, and prices for memorabilia from the ship have soared in recent years. In October a violin believed to have been played as the doomed vessel sank sold for more than 1 million pounds.