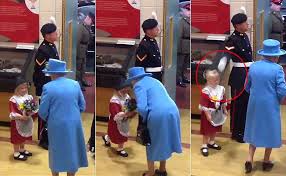 A six-year-old British girl chosen to give a posy to Queen Elizabeth II got more than she bargained for when a soldier standing next to her knocked off her hat during a salute.
Maisie Gregory had donned a traditional Welsh costume for her meeting with the royal in Cardiff on Thursday, and presented the flowers and made a curtesy without a hitch.
But as the queen moved away, the soldier next to Maisie lifted his arm into a salute and knocked off her bonnet, prompting the girl to run to her mother standing behind.
The soldier immediately turned around and apologized to Maisie and her mother, according to the WalesOnline website.
Joanne Gregory, who is married to a soldier, replied that her daughter was fine but overcome with tiredness.