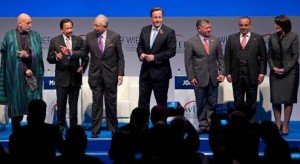 The British Prime Minister David Cameron wants London to ‘stand alongside Dubai’ as an Islamic finance hub, and is today expected to launch two initiatives to tap into the burgeoning sector.
An Islamic Market Index is set to be launched on the London Stock Exchange, while Britain is to become the first country outside the Muslim world to launch a sukuk, or Islamic bond, AFP reported.
“I don’t just want London to be a great capital of Islamic finance in the Western world,” Cameron is due to say today, according to the Associated Press. “I want London to stand alongside Dubai as one of the great capitals of Islamic finance anywhere in the World.”
London is already the “biggest center for Islamic finance outside the Islamic world”, according to a release of a speech Cameron is due to deliver today.
The proposed Islamic Market Index would track Shariah-compliant investments, while the UK Treasury is working on the issuance of a sukuk worth around £200 million ($322 million), AFP reported.
Cameron’s announcements are expected to be delivered at the World Islamic Economic Forum, which starts today in London. It is the first time the forum is being held outside a Muslim country.
Dubai this month unveiled plans become the capital of the global Islamic economy, with a focus on financial services, food products, education and tourism.