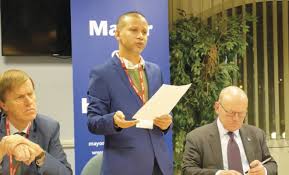 Delivery drivers in the UK capital are living “in terror” of acid attacks as criminals are increasingly using corrosive substances to steal motorbikes, workers claim.
“The acid attacks have caused such terror in our minds,” said Abu Sumon, a delivery driver who works with Uber Eats and originally hails from Bangladesh. “This is our biggest concern nowadays.”
Fellow drivers have been targeted by attackers in recent months, including Jabed Hussain. Hussain was finishing his shift as an Uber Eats driver last summer when a teenager sprayed acid on him.
His face began to burn almost immediately. “I can’t explain to you how it felt,” he recalled. “I was crying like a baby.”
While many of his physical injuries have healed — he was shielded largely by his helmet — the psychological scars of the attack remain. “I don’t trust any-one at the moment,” he said.
Locking his doors and peering over his shoulder, Hussain said he lives in near-constant fear. Sadly, Hussain’s story is not unique. Acid attacks have increased across the UK, with more than 400 incidents occurring last year in London alone.
Criminal activity is behind the rise in attacks, according to experts, with acid increasingly used as a weapon in gang violence and attempted muggings. Delivery drivers, who ride alone in unfamiliar areas, often working long into the night, have been targeted.
MD Nawshad Kamal was the victim of an acid attack while delivering a meal for the Turkish restaurant he worked for. After being approached by two young men who demanded the keys to his moped, Kamal said he remembers seeing one of them pull out a plastic bottle.
“The next thing I realized was that my eyes were burning,” he said. “It was like I was on fire.”
Kamal suffered serious burns to his eyes and was kept unconscious by doctors for six days while he underwent treatment.
The attack shocked fellow delivery drivers, he said. “Some of my friends, when they heard about me, because they do the same job, they said they were going to sell their bikes,” he told Arab News. “Everyone is scared.”
According to Sumon, attacks such as those against Hussain and Kamal have forced drivers to take extreme precautions in their daily routines: When delivering
to high-crime areas, they now share their location with one another via WhatsApp in case they are attacked. Other areas have been declared unofficial “no-go” zones, he said. He and fellow drivers regularly refuse to take jobs in parts of Hackney, Tower Hamlets and Newham after dark as muggings, including acid attacks, are on the increase, he said.
Uber Eats did not immediately respond to a request for comment on the issue. Sumon said the authorities had failed to take the concerns of delivery drivers seriously.
“Because we are working-class and the majority of delivery drivers are from immigrant backgrounds … I feel that probably there is a negligence from law enforcement and on the government sides,” he said. “They don’t tend to care about us.”
Hussain, who is originally from Bangladesh, said the UK government should do more. “In Bangladesh, I was never a victim of an acid attack. But it was here, in one of the most civilized countries, in this multicultural city.”