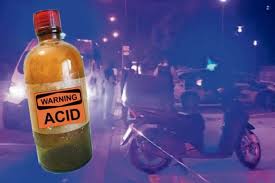 A 16-year-old boy has appeared in court accused of carrying out a string of acid attacks on moped riders in north-east London.
The teenager has been charged with 13 offences, six under a Victorian law.
He allegedly targeted six men on bikes in less than 90 minutes on 13 July, spraying them in the face with a noxious liquid.
The boy appeared at Wood Green Crown Court by videolink from Feltham Young Offenders Institution.
One victim was left with “life-changing injuries”.
The defendant, from Croydon, south London, is further accused of a separate moped robbery on 25 June.
He was charged with 13 offences in all, including six counts of throwing a corrosive liquid with intent to “disable, injure, disfigure, maim, or cause grievous bodily harm” under Section 29 of the Offences Against The Person Act 1861.
The offence carries a maximum sentence of life imprisonment.
He was also charged with two counts of robbery and four counts of attempted robbery.
Judge Noel Lucas QC adjourned the case until Thursday. -BBC