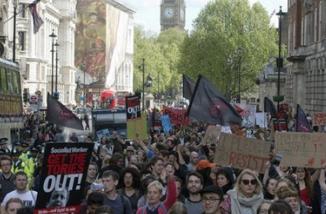 Anti-austerity protesters who marched on Prime Minister David Cameron’s official residence following the Conservative Party’s election victory last week have complained of police violence.
Student group the National Campaign Against Fees and Cuts said peaceful demonstrators complained of being beaten with batons, choked, punched and thrown to the ground outside Downing Street, central London, on Saturday.
In a statement issued on Sunday, the group said hundreds of protesters and passers-by, including tourists, were ‘kettled’ – hemmed in by police and prevented from moving – for about three hours.
BBC News reported 17 arrests as demonstrators threw smoke bombs, traffic cones and tomato ketchup at police. Four officers and a civilian police worker were injured.
A nearby war memorial was also vandalized with anti-government grafitti.
The Conservatives won last Thursday’s election to secure a parliamentary majority with 331 out of 650 seats, paving the way for further welfare cuts.
“I have never experienced such extreme force of police violence,” Daphne Wikken, a 22-year-old student at the London School of Economics, was quoted as saying in the statement.
“My legs are bruised everywhere and I cut my arm. For me what is particularly scary is the fact that the government is already cracking down on dissent so badly just days after the general election.”
The Independent newspaper quoted Ch. Supt. Gerry Campbell, of the Metropolitan Police, as saying: “A small minority were intent on causing disorder and engaged in violence, injuring five officers and staff – two of which required hospital treatment.”