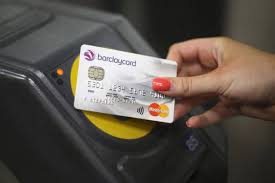 Thousands of Tube passengers today began using their bank and credit cards to “touch in” as a new payment system was launched on the London Underground as the long-term replacement for Oyster.
London Transport chiefs said the introduction of “contactless” cards was a world first on public transport. But they declined to set a target for uptake amid suggestions that inertia will mean many passengers will be reluctant to switch.
Transport for London hopes that  contactless can boost revenues and reduce the costs of paying a third party to run Oyster.
Shashi Verma, TfL’s director of customer experience, said: “We have not done projections because they are driven by so many factors beyond our control such as how many cards are issued and what’s happening on the national rail network.” But he added: “The convenience factor is really selling.”