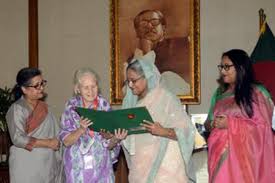 Octogenarian British humanitarian activist Lucy Helen Francis Holt’s dream of becoming a Bangladeshi citizen came true as she received a citizenship certificate from Prime Minister Sheikh Hasina today.
The Bangladesh government honoured the 87-year-old, who has been living in Bangladesh for 57 years, with granting her citizenship for her immense love for this country and for rendering services to the humanity.
“Prime Minister Sheikh Hasina handed over the Bangladeshi citizenship certificate to Lucy Helen at a function at her official Ganabhaban residence here this afternoon,” PM’s Press Secretary Ihsanul Karim told reporters after the event.
Getting the Bangladeshi citizenship, her long ordeal for visa renewal every year has ended.
Bangabandhu’s younger daughter Sheikh Rehana and PM’s daughter Saima Wazed Hossain were present on the occasion.
PM’s Principal Secretary Md Nojibur Rahman and Secretary of the Security Services Division of the Home Ministry Farid Uddin Ahmed Chowdhury were also present.
The press secretary said both the prime minister and Sheikh Rehana talked to Lucy, a humanist who is now working at Oxford Mission in Barisal city.
“She (Lucy) was so impressed by getting citizenship,” he said.
Lucy informed the premier that she had a wish to meet Bangamata Fazilatunnesa Mujib, but it was not fulfilled. “That desire was fulfilled by meeting you today,” she said.
Lucy, daughter of John Holt and Francese Holt, was born in the British town of St Helens on December 16 in 1930. After bidding farewell to the teaching of Cole Hills Junior School, she inspired to serve humanity at only 19 years and chose nursing as her profession.
Lucy Helen, who was interested in the Indian sub-continent since her childhood, came to Bangladesh in 1960 with a vow to serve the humanity.
On that year, Lucy joined Barisal Oxford Mission and taught primary school children. Since then she hs been staying in Bangladesh falling in love with the soil and people of this country.
She then worked in Jessore, Khulna, Naogaon, Dhaka and Gopalganj for 57 years. Lucy, who went on retirement in 2004 came back to Barisal Oxford Mission in that year.
In her retired life, she is now teaching English education and mental growth to the distressed children.
Besides, Lucy is collecting fund from the rich people for the distressed children.
The celibate Lucy also made outstanding contributions to Bangladesh’s liberation war. Making her life silly, she took care of the war-wounded people during the war.
At that time, Lucy used to work at Jessore Catholic Church, where she taught English to the children. When the war started, all except Lucy went to Khulna for safe shelter after closing the school.
When people’s life was in danger, she rushed to nearby Fatema Hospital and wanted to provide services to the war-wounded civilians. The physicians at the hospital were surprised at the interest of such a foreign woman and gave their consent. After that she started taking care of the war-wounded people.
Lucy wished to be buried in Bangladesh and applied for Bangladeshi citizenship to the home ministry on January 22 this year through the Barisal deputy commissioner. And her application was considered with due importance.
After completing the official procedure, the government decided on March 22 to award her citizenship by considering her special contribution to Bangladesh.
As a result, Lucy could enjoy all facilities of a Bangladeshi citizen and retain her all facilities as the British citizen.
Lucy wrote several letters to her friends and others by building up opinion in favour of the liberation war. She kept in her possession a letter describing the war situation in Bangladesh. After the war, she in 1973 wrote a letter to Bangamata Fazilatunnesa Mujib and sent some gifts to her. Sheikh Rehana thanked Lucy for the letter and gifts in a letter which Lucy preserved. -BSS