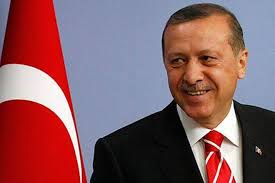 President Recep Tayyip Erdogan said the emir of Qatar gave a luxury jumbo jet as a “gift” to Turkey, rejecting opposition claims the plane had been bought in a costly purchase for the presidency.

In comments published Monday, Erdogan said Turkey had shown interest in buying the on-sale Boeing 747-8 plane – reportedly worth around $400 million – but Shaikh Tamim Bin Hamad Al Thani, emir of Qatar, insisted on offering the plane as a gift.

“We were interested. When the Qatar emir was informed of this he gave it as a gift, saying ‘I won’t take money from Turkey. I will give this plane as a gift.'”

The Turkish president insisted that while the jet would be used for his trips, “the plane is not mine, it is the Turkish Republic’s”, in comments to reporters while returning from a visit to Azerbaijan.

Erdogan said that once the paintwork was finished he hoped to use the plane for travel.
Gulf media have said that the giant plane, which was part of Tamim’s personal fleet, is equipped for only 76 passengers and has lounges and boardrooms.

His remarks came after criticism last week by lawmakers from the main opposition Republican People’s Party (CHP), who claimed Erdogan had bought the plane.

CHP MP Gamze Tascier said on Twitter that a sales official from a company based in Switzerland confirmed the sale of a Boeing 747-8 jet. “The company says it was sold, supporters say it was a gift,” she said.

After Erdogan’s latest remarks, CHP leader Kemal Kilicdaroglu hit back at Erdogan and questioned his “honour” over the move to accept such a gift.

“How can it not cause you discomfort?” Kilicdaroglu said on Monday.

The CHP and Erdogan’s critics have repeatedly accused the Turkish strongman of having a penchant for luxury, notably in the vast new Ankara presidential palace that opened in 2014.

Erdogan, however, has hit back by saying that such facilities are national assets worthy of a state of Turkey’s importance.

The plane is also a new symbol of the close relationship between Doha and Ankara that has seen both sides help the other in times of trouble.

Doha promised to make a $15 billion direct investment in Turkey during the Washington-Ankara spat last month which saw the lira’s value fall drastically against the dollar.

Ankara, one of the top exporters to the emirate, also provided unstinting support to Doha after Saudi Arabia and its allies imposed an embargo from 2017.