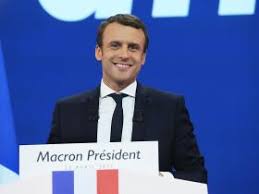 Ripping up France’s political map, French voters elected independent centrist Emmanuel Macron as the country’s youngest president Sunday, delivering a resounding victory to the unabashedly pro-European former investment banker and strengthening France’s place as a central pillar of the European Union.
Macron, who had never run for office before, celebrated with thousands of jubilant, flag-waving supporters outside the Louvre Museum in Paris on Sunday night. The European anthem “Ode to Joy” played as he strode out to address the swelling crowd.
“France has won!” he said. “Everyone said it was impossible. But they do not know France!“
Marine Le Pen, his far-right opponent in the runoff, quickly called the 39-year-old Macron to concede after voters rejected her “French-first” nationalism by a large margin. Le Pen’s performance dashed her hopes that the populist wave which swept Donald Trump into the White House and led Britain to vote to leave the EU would also carry her to France’s presidential Elysee Palace.
Macron told the Louvre crowd that the Le Pen vote was one of “anger, disarray.”
“I will do everything in the five years to come so there is no more reason to vote for the extremes,” he said.
Earlier, in a solemn televised victory speech, Macron vowed to heal the social divisions exposed by France’s acrimonious election campaign.
“I know the divisions in our nation that led some to extreme votes. I respect them,” he declared, unsmiling. “I know the anger, the anxiety, the doubts that a large number of you also expressed. It is my responsibility to hear them.”