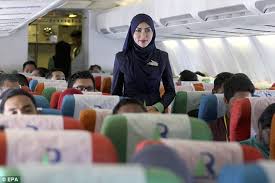 A new airline has launched in Malaysia which follows the rules of Islamic law in a first for the country. During flights, there is no alcohol served and only halal food is provided.
Rayani Air’s maiden flight took place on Sunday ferrying 150 passengers from the capital Kuala Lumpur to Langkawi, a popular tourist destination where the airline is headquartered.
There are a number of Sharia based rules and regulations in place for all flights offered by the airline, which services five domestic locations. Muslim women who work as part of the cabin crew must wear a hijab while non-Muslim women must wear a “decent uniform,” Managing Director Jaafar Zamhari told local media.
Before each flight takes off, there will be a recital of prayers, while in flight, no alcohol will be served and any food or beverages provided will be halal, i.e. permissible under Islamic law.
Currently operating with two Boeing 737 jets, the airline hopes to offer flights to Mecca for the Umrah and Hajj pilgrimages in the coming years.
Rayani Air brings to four the number of shariah compliant airlines around the world with Royal Brunei Airlines, Saudi Arabian Airlines and Iran Air being the other three.
In October, Bloomberg reported that London based startup Firnas Airways were also planning to launch in 2016 with a similar offering for its passengers.