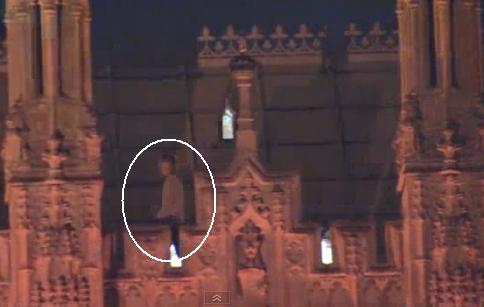 A man was arrested Sunday after spending the night wandering around on the roof of the British parliament.
The 23-year-old man, who has not been identified, spent around eight hours on top of the Palace of Westminster in London after first being spotted late Saturday.
Police, fire and ambulance crews were called to the scene, with police negotiators also in attendance.
It is still unclear who the man was and why he was on the roof.
“At 05:01 a.m. [0501 GMT] on Sunday the man was detained,” London’s Scotland Yard police headquarters said in a statement.
“He was arrested on suspicion of criminal damage and trespassing. He has been taken to a central London police station pending further enquiries.
“At this stage it is too early to ascertain the reason as to why the man was trespassing on the roof.”
The BBC said the man was on his own, moving around a lot and seemed calm, with his hands in his pockets, staring down at the onlookers on the ground.
The roof has been the scene of stunts by campaigners in the past, including by protesters demonstrating against plans for a third runway at London Heathrow Airport in 2008, and by Greenpeace a year later.
The 19th century Gothic Revival landmark, on the north bank of the River Thames, is home to the lower House of Commons and the upper House of Lords.