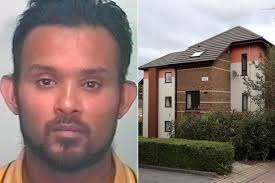 A court in UK has sentenced a man for 17 years for repeatedly raping a Bangladeshi woman, according to reports by the BBC and Daily Mail.
Abdul Hanif, 30, from Bradford, befriended his victim before raping and assaulting her, police said.
Hanif, a McDonald’s worker, has been found guilty of keeping the victim as a sex slave for four months, during which she was repeatedly raped and beaten up.
Jurors were told that the female student had moved to London from Bangladesh to study accountancy.
She first met Hanif in February when she was working in a sandwich shop in London, the judge said.
They exchanged numbers, and Hanif offered to take her to ‘a nice new home’ in Bradford.
Hanif took away her credit cards and mobile phone, effectively making her a prisoner, while forcing her to have sex with him every day.
The victim said she was made to cook his meals and he would fly into a rage if he was unhappy with what she served.
She was only freed after she managed contact with one of Hanif’s former friends, who alerted the police.
Police went to Hanif’s flat in June and rescued the victim from there.
“Hanif befriended his victim when she was vulnerable, but then went on to repeatedly rape and assault her,” said Det Con Brett Carter of West Yorkshire Police.
“This must have been a harrowing ordeal for her and we would like to thank her for the courage she has shown in coming forward and reporting Hanif’s crimes.”
In a victim impact statement read out to the court, the victim said: ‘I feel as if my life is totally ruined for what Abdul Hanif did to me.
“Everything in my life has now changed. I can’t smile or go anywhere like I could before.”