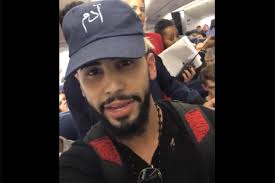 A Yemeni-American muslim man from New York, Adam Saleh, called for a boycott of Delta Airlines after charging he was removed from one of its flights on Wednesday for speaking Arabic.
Delta said he was asked to leave the London to New York flight on Wednesday morning following an unspecified “disturbance.”
“We spoke a different language on the plane, and now we’re getting kicked out,” the 23-year-old prankster, who has more than 2.2 million YouTube followers, said in a video filmed as the incident unfolded, and posted on Twitter.
Saleh said he had been talking to his mother on the phone when fellow passengers complained, and he was told to leave.
“You guys are racists. I spoke a different language and you say you feel uncomfortable! I can’t believe my eyes. We spoke a different language and now there are six white people against us bearded men.”
Several passengers could be seen voicing their support for Saleh, with one calling out the airline staff in protest, but others at the rear of the aircraft seemed to approve, waving him off and saying “Good Bye.”
After an hours-long delay involving more security checks, Saleh said he was finally able to board a flight to New York with a different airline — and would head straight to see his lawyer.
Three hours after it was posted, Saleh’s video had been retweeted more than 200,000 times, and the hashtag #BoycottDelta — which he included in a subsequent tweet — was trending on Twitter.
It was the latest of several cases in the past year in which passengers have run into trouble on American flights for speaking Arabic — or in one case for writing mathematical equations that passengers mistook for Arabic.
In a statement on the incident, the airline said it was investigating allegations of discrimination.
“Two customers were removed from this flight and later rebooked after a disturbance in the cabin resulted in more than 20 customers expressing their discomfort,” it said.
“We’re conducting a full review to understand what transpired. We are taking allegations of discrimination very seriously; our culture requires treating others with respect.”