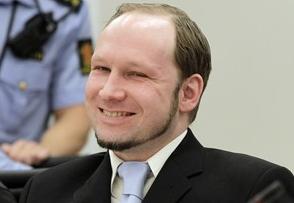 Norwegian mass killer Anders Behring Breivik has been accepted for study to political science at Oslo’s university.
The 36 year old admitted killing 77 people when he bombed central Oslo and then went on a shooting spree at a youth camp on a nearby island in 2011.
He will have no contact with staff or students as he studies from his cell.
In 2012, he was sentenced to the maximum 21 years in prison for carrying out Norway’s worst massacre since World War Two.
This jail term can be extended if he is deemed to remain a danger to society.
A report in the BBC states that the university’s rector, Ole Petter Ottersen, said that Norwegian inmates “have a right to pursue higher education in Norway if they meet the admission requirements and are successful in competition with other applicants.”
In an explanation on the university web site, Mr Ottersen admitted that the university had faced “moral dilemmas” about Breivik’s admission.
Breivik has been studying certain course modules since first applying to the University of Oslo in 2013, but he will now be taught as a full student. He will also  be subject to strict regulations with no access to internet resources or receive any personal guidance from tutors. All communication with the university will take place via “a contact person in prison”.
Breivik first applied to study in 2013 but did not meet entry requirements as he had never completed secondary school. Instead, he was allowed to study certain political science modules.
His deadly rampag was later found in an Oslo court to have been a premeditated act of terrorism.
Breivik had extremist right-wing views and in court had said that he had reacted against what he saw as a Marxist-Islamic takeover of Europe.