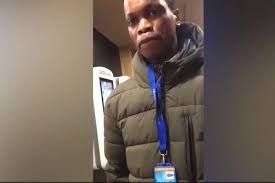 A security guard who told a Muslim woman to remove her hijab at a McDonald’s restaurant in London has been suspended.
The fast food chain confirmed on Tuesday that the man, who is employed by a third party, was suspended pending an ‘internal investigation’ into his behavior.
The young Muslim woman filmed the security guard blocking her path to the counter and telling her: “It’s just a matter of taking it off” at a branch in the Seven Sisters London suburb on Friday.
The Muslim woman told the McDonald’s security guard: “It’s not just a matter of taking it off. I wear it for religious reasons and I’m not ashamed of it. And I will stand in line and I will get the food that I want because this isn’t OK.
“I go to all the shops and any restaurant I want and in my hijab and I buy the food I want to buy and then I come here. And I literally live down this street from here.
“This is actually like a hate crime, this is a hate crime.”
The footage ended with the Muslim woman leaving the restaurant and telling staff: “I don’t want anything anymore.”
The video was posted on Twitter by a woman named Sabrina, who said the footage was recorded by her friend.
Outraged members of the public soon took to Twitter to have their say.
A man named ParistoPalermo wrote “Yo! @McDonalds you owe this woman a life time of food, a public apology and those staff want sacking. #jewsstandingwithmuslims”
Sharron Preston wrote, “Why do you even care whether they are or are not wearing it for religious reasons? It’s a piece of cloth a woman has chosen to wear. It’s just another excuse to point the finger at Muslims.”
OhGoshItzAnna chimed in with, “Maybe stop watching Fox news and try to talk to actual Muslim women.”
In a statement to Arab News, Paul Pomroy, CEO of McDonald’s UK, said: “I am deeply sorry that this happened, and am taking the matter very seriously, addressing the situation with both the restaurant and security firm involved.
“The restaurant involved is managed and owned by Amir Atefi, a franchisee who has been part of McDonald’s for over 30 years. Mr.Atefi is proud of his diverse workforce, and was upset and concerned to hear how one of his valued customers has been treated. He has been holding sessions for his management teams to reiterate his personal and our company approach with matters of faith.”