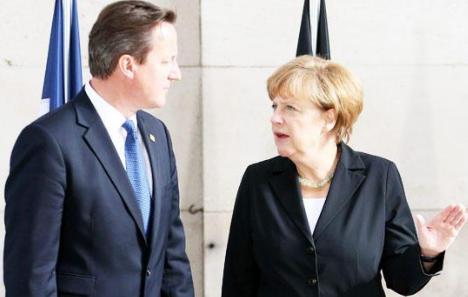 Angela Merkel urged fellow EU leaders to hold out a hand of compromise to Britain’s David Cameron Thursday to defuse a row over the likely nomination of Jean-Claude Juncker as European Commission president.
As EU leaders headed for a summit Thursday expected to be dominated by the worst dispute since the height of the euro crisis, the German chancellor said Cameron’s refusal to back Juncker was not a drama.
“I don’t think it is a tragedy if the vote isn’t unanimous,” she said of a vote on the matter expected to take place Friday on the second and last day of an EU summit.
“Therefore we have to see that we find a high degree of common ground in the questions related to the content” of EU policy in the coming years, Merkel added.
as she joined Europe’s conservative leaders for pre-summit talks in the Flemish town of Kortrijk.
“I think we can find here compromises and make a step toward Great Britain,” she added. “I repeatedly spoke of a European spirit which is needed and which will help us to find good solutions.”
Cameron’s vocal campaign to block the nomination of Juncker is set to flop, raising fears this could reinforce a growing push in Britain to exit the European Union ahead of a possible referendum on the issue in 2017.
After a last-minute loss of support from the Dutch and Swedish premiers on the eve of the summit, Cameron appears to have only a single ally left in his anti-Juncker drive — Hungary’s much-criticized Viktor Orban.