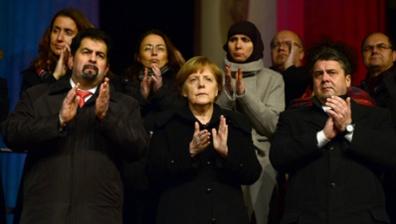 German Chancellor Angela Merkel has joined a Muslim community rally to promote tolerance, condemn the attacks in Paris and rebuke a growing anti-Islam movement.
Speaking at the gathering in Berlin on Tuesday, she urged Germans not to marginalise Muslims or other minorities, saying: “Excluding population groups due to their faith or their origin is beneath the dignity osf our liberal state.
“Hatred of foreigners, racism and extremism have no place in this country.”
President Joachim Gauck also addressed the vigil at the Brandenburg Gate, organised by the Central Council of Muslims in Germany under the banner “Let’s be there for each other. Terror: not in our name!”
“We are all Germany,” Gauck said. “We, democrats with our different political, cultural and religious backgrounds; we, who respect and need each other; we, who want to live life in unity, justice and freedom.
“Our answer to the fundamentalism of the Islamist perpetrators of violence is democracy, respect for the law, respect for each other, respect for human dignity. This is our way of life!”
Merkel on Monday thanked leaders of Germany’s four-million-strong Muslim community for quickly and clearly condemning the violence committed in the name of their faith in Paris.
“Germany wants peaceful coexistence of Muslims and members of other religions” and Tuesday’s vigil would send “a very strong message”, she said at a joint news conference with Ahmet Davutoglu, Turkish prime minister.
On Sunday, Merkel and Davutoglu joined French President Francois Hollande and other world leaders at a massive solidarity rally in Paris.
Announcing Tuesday’s vigil, the Muslim Council and the Turkish Community of Berlin said: “We Muslims in Germany condemn the despicable terror attacks in France in the strongest terms. We want to express our solidarity with the French victims.
“There is no justification in Islam for such acts.”
With their vigil, the Muslim group said, they “want to send a message for peace and tolerance, against hatred and violence and for a cosmopolitan Germany which respects and protects the freedom of expression and religion”.