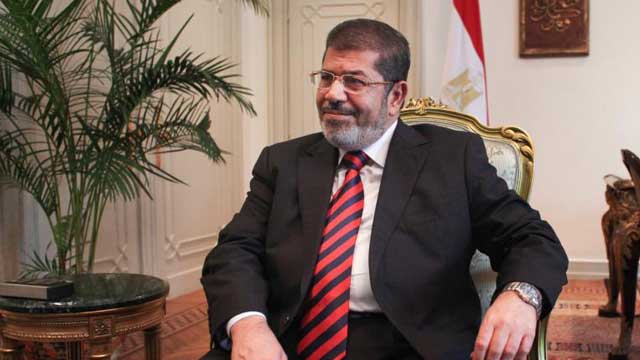 The former Egyptian president, Mohammed Morsi, died in Cairo on Monday at the age of 67. Egyptian state television announced that Morsi, who was ousted by the military on July 3, 2013, had been attending a court session at his trial on charges of espionage and links with the Palestinian militant group Hamas.

It was reported that he collapsed in the courtroom inside a glass cage he and others had been sharing, before his body was transferred to a local hospital.

Attorney-General Nabil Sadiq issued a statement saying: “The accused, Mohammed Morsi, in the presence of the other defendants inside the cage, fell unconscious, where he was immediately transferred to the hospital.

“The preliminary medical report stated that by external medical examination they found no pulse, no breathing, and his eyes were unresponsive to light. He died at 4:50 p.m. and no apparent injuries to the body were found.”

Sadiq added he had ordered the transfer of teams from the Supreme State Security Prosecution Office and the Southern Cairo Prosecution Office to conduct an investigation into Morsi’s death, and to examine surveillance footage from the courtroom and collect witness testimonies.

He also ordered that a senior forensic committee headed by the chief medical officer and the director of forensic medicine to prepare a forensic report on the cause of death.

Various outlets say that a state of high alert has been issued by the military and the Ministry of the Interior throughout the country following the news, for fear of riots or activity by the Muslim Brotherhood, in which Morsi was a prominent figure.

Morsi became president in June 2012 after the first democratic elections in the country following the overthrow of Hosni Mubarak on Jan. 25, 2011. He was Egypt’s fifth president.

He was born to a family of farmers on Aug. 20, 1951, in the village of Al-Adwa in Sharkia province. He married in 1978 and leaves behind his wife, five children and three grandchildren.

Following his deposition and arrest, Morsi was sentenced to 20 years imprisonment on Oct. 22, 2016, over bloody clashes that took place on Dec. 5, 2012 in front of the presidential palace in Cairo, between supporters of the Muslim Brotherhood and opponents of Morsi rejecting a constitutional declaration issued in November of that year.

Other sentences meant his total incarceration could have been up to 48 years, with the ongoing espionage case potentially carrying a further maximum sentence of 25 years.