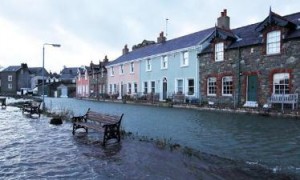 Waves up to 27 feet (8.2 meters) high slammed into Britain’s southwestern coast on Monday, as lashing winds and heavy rain battered parts of the UK and coastal residents braced for another round of flooding.
The monster waves were recorded at Land’s End, the southwestern tip of the UK
In Aberystwyth in Wales, seafront homes, businesses and student residence halls were evacuated as high tides hit the Welsh coast.
The Met Office, Britain’s weather forecasting body, warned of wind gusts up to 70 mph (113 kph) and exceptionally large waves along the coasts of Wales, southwest England and Northern Ireland.
It said the storm is loosely connected to the weather system that caused the USwinter storm, which dumped large amounts of snow in the Northeast and delayed thousands of flights.
“A very strong jet stream helped to steer a lot of low pressure across the UK,” said forecaster Charles Powell.
At least seven people have died in a wave of stormy weather that has battered Britain since December, including a man killed when his mobility scooter fell into a river in Oxford, southern England.
The Environment Agency issued three severe flood warnings Monday — meaning there is a threat to life and property — for the county of Dorset in southwestern England, as well as more than 300 less serious flood alerts.