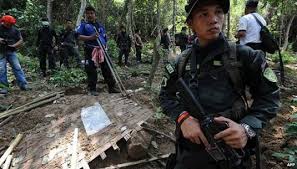 A total of 139 grave sites and 28 human-trafficking camps have been found in a remote northern Malaysian border region, the country’s top police official told reporters Monday.
National Police Chief Khalid Abu Bakar revealed the findings at a press conference a day after the government announced the discovery of camps and graves, the first such sites found in Malaysia since a regional human-trafficking crisis erupted earlier this month.
“(Authorities) found 139 suspected graves. They are not sure how many bodies are inside each grave,” Khalid said.
He added that the number and size of the 28 camps found suggested that they may have housed a combined hundreds of people.
The largest could hold up to 300 people, another had a capacity of 100, while the rest could hold about 20 each, he said.
The discovery is the latest evidence of the lethal nature of the region’s human-trafficking trade.
Police in neighboring Thailand in early May had found secret human-trafficking camps on their side of the border and dozens of shallow graves.
Malaysian officials had subsequently dismissed the suggestion that similar sites existed on Malaysian soil.
Khalid said the camps and graves were in jungly, mountainous areas that were difficult to reach.
He declined to respond to a later question on how such an extensive system of camps could have existed without detection by authorities and whether the complicity of corrupt officials was suspected.
Rights groups have long accused Malaysian authorities of not doing enough to contain human-smuggling.
Khalid said at least one body was “badly decomposed”.
The authorities were in the painstaking process of exhuming and conducting post-mortems on the remains, he added.
Thailand launched a crackdown on human-smuggling following the discovery of its mass graves.
The move appears to have caused nervous traffickers to abandon their human cargo at sea, leaving boats filled with hundreds of starving migrants seeking to land in Malaysia, Thailand and Indonesia.
After initially turning them away, Malaysia and Indonesia last week bowed to international pressure, saying they would admit boat people pending their repatriation or resettlement elsewhere.