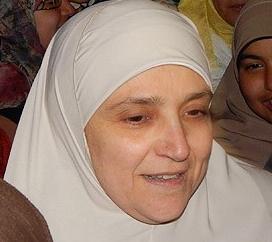 Naglaa Mahmoud, the wife of ousted Egyptian president Mohamed Morsi has claimed that she has been a close friend of Hillary Clinton since the 1980s.
Egypt’s Al-Wafd and Vetogate claimed that while speaking to Turkey’s Anatolia Agency, Naglaa Mahmoud is was reported to have said that she met Hillary Clinton when she was living in the US with her husband.
“We have a long friendship of many years. We lived in the U.S. and my children learned there. This friendship increased further when my husband became the legitimate president of the country,” she said.
Saying that the Muslim Sisterhood, the female off-shoot of the Muslim Brotherhood, has routine business dealings with the Clintons, she said that Hillary Clinton often asks for both official and unofficial help from them in dealing with issues in the Middle-East.
Mrs. Morsi is said to be friends with Saleha Abedin, who is the mother of Huma Abedin, a Muslim Students Association board member at George Washington University who started working for Hillary Clinton as an adviser in 1996.
Mohamed Morsi was ousted in a military coup by General Abdel Fattah al-Sisi on July 3, 2013 after just one year in power as Egypt’s first democratically elected president.